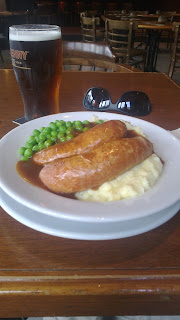 I will start off this time with part of a letter I received from my lovely
Marie who helped me to put my book together. We keep in touch with
each other by letter correspondent, and I must say we both enjoy
touching base from this angle because more seems to flow than it would
by phone.


Anyway Marie heads this letter to me by saying, I love your letters. Yes,
it seems that when we begin to lose the part of our brain that deals with
everyday living, another part of our brain get a chance to flow. My cousin
was bemoaning that her mother was losing touch with dates and days, but
could remember further back in her childhood. I said to her, don’t be sad
about the day-to-day losses, be happy that you and your Mum are able to
travel further back into your roots and have all that precious time to share
these new pages in your family story.


I said to my cousin, I think this is nature’s plan. Our brains are quick and
practical when they need to be, but when it doesn’t matter anymore
because life will go on regardless we can get this bonus of long term
memory and the wisdom born of life’s sharp lessons to pass on to those
coming behind. In the days our family history was passed down orally this
was, and in many cases still is important to the richness of our cultural
heritage.


Dear Marie I replied
As always great to receive your lovely ways of expressing life as it bounces
off each day that comes your way. The little things I believe bring us our
simple pleasures I feel are lost in all ages of those who look for pleasures
beyond their means.
I am trying to get into a new style of settings that are set around our so
called way of living as I am both tired and bored with things that don’t
seem to fit in with both old and new styles of phrasing things. A lot of
people may not call it writing as such, but if they take the time to study
my age, background and how I was forced to collect a lot of it, they
might just tumble to something. There isn’t any foolproof way to go
about anything because there millions of ways. And that also amounts
to what can also be criss-crossed just as many times. Learning never
stops, only our time on earth.


I am happy that you got my message about going back in time as we get
older. Our brains have had their run of all sorts of early speeding. Let the
younger people have their moments, and we whenever possible find
something to keep us in the things we want to do so that we can smell
more of the roses that you Marie mentioned. And if you look deeply
there is nothing any of us can do to stop it as otherwise you’re trying to
play around with God’s creation which won’t get us very far.


Anyway, I’ve got to try all sorts of things on my computer. not much else
to have fun with in my condition.
Maybe in another sense this is why this has all come my way, so I will call
it Terry’s Crazy Irish Crawl.
My daughter Rachel got me a cheap landline phone as my cell phone was
running into the expensive quarter for people ringing in. There was a
worker here in the Home who said he would set it up, but it didn’t work.
So I being who I am rang help to my angel computer wizard friend Patrick,
and with a bit of moaning and gasping because of my old body I amazed
myself as he talked me through how to set it up. Yes, it worked.


Now I will write a page or so from my book, and then make a few
comments.
My father would only release his hatred when he was pretty well oiled
up. When he was sober he could be quite charming and humorous. I
often asked myself in later life what caused this build up of hatred.
I did hear that he had been baptised a Catholic, but later rechristened a
Protestant. The reason for that I was led to believe was that his mother
had died at an early age, and his father married again. You could say
maybe this was the songbird whistling in my ears, but on the other
hand you would have to ask how this all remained in my mind.
And you could also ask why did he marry my Mother a Catholic knowing
his family and friends wouldn’t approve. Mind you I didn’t know much
about love at that stage of my life. How could I.? Besides not getting
much from him, little did I know the implications that love placed on the
shoulders of both men and women. I would have to wait till I got the
bite of my first apple?


One of the highlights of my life growing up was the time my Father
bought two bicycles. A half size for Gerald and a three quarter one for me.
I had never ridden a bike before, but believe me I learned fast. That bicycle
became a very big part of my life as well as becoming my second best
friend after my Mother. And apart from being part of the cause of bringing
me into this world, that bicycle is something I shall remain grateful to Da for.


Many was the time after helping Ma in the house, I’d take off for Bray Head
to play Cowboys and Indians with a few boys I got to know. And whenever
possible I’d take Gerald on my crossbar. There wasn’t much of me, but there
was a lot less of Gerald. More important however, that bike gave me the opportunity to accomplish many things. First it gave me the freedom I so badly
needed. As I grew older so long as Ma knew where I was, I could stay out
reasonably late, and in in that way play for time. The more Da drank the less
of a problem he was. Mind you he soon caught on to my little scheme and
would lock me out. But Ma bless her soul was on top of that. Her bedroom
window was always available to me, and from there I could sneak into my
bedroom when the timing was right. The tricks we had to keep unnecessary
things afloat was quite a run of the mill.


Now what I have written could be classed as a frog jumping way of throwing
things your way because it contains some of the humanity that flows through
me. The”I’ of me creates all that I am. So you can toss it around as many times
as you like and still come up with something different for the simple reason
I have no wish to bore you. Just simply call it my way of survival. I’m here I
fully believe to share my life with those who feel the need to share theres in
what form they feel comfortable to share theirs. And in this manner maybe
we can break down a few barriers that need never have been there.


So till next time may we all travel as best we can.
God bless