The Last Round Up - Instalment 2

I believe that I picked a good title in calling my final blog run home as the Last Round Up. It seems to set more of a purpose to what I will be attempting to place before you in regards to what I have been placed on this earth for. As I get older the things I have experienced, and will experience, make a lot more sense to me than ever before. I am feeling quite excited as to where this will in some way all lead to. Of course as you already will have noticed I am forever an Irish optimist. Neither quick to believe, or quick to disbelieve. If you tend to rush into judgements, you tend to cast doubt not only on others, but also on wonderful things that can influence what direction you may choose to take. I can’t really explain the full meaning in human terms behind what I say or do. Only those of you who have had similar, or near similar experiences as myself will grasp where I am coming from. As someone once said, It’s the sameness that brings us closer, but its newness that will keep us together.

So the advice I give to myself, and hope That I am allowed to share with you is, “Be as wise as you can, be stimulating, be exciting, share new ideas, grow and develop. Don’t ever be predictable.
Now I am going to give you a low-keyed run down on what happened to me close to a month ago. At that time I had been suffering for quite some time with a rotten discomforting pain in my stomach. Mind you I have had this on and off through the years, but this time it was lingering on for a longer period than usual.

On top of that I was finding it more difficult to run a catheter into my bladder due to treatment I had received to relieve of prostate cancer. And thrown in for some kind of measure I was having more than usual problems with my arthritis. Trying to get my socks on, was quite an ordeal. I really felt that I was coming close to the end of my usefulness in this life. But hey presto, God once again heard my prayers and I now have a urine bag fitted to my leg as I await an operation to hopefully get my water works flowing in the somewhat normal manner for a guy of my age. Now for the big one. The major relief for both my stomach and arthritis. I was prescribed Prednisone and once again I have become dangerous once again. Hopefully only to myself, but just keep an eye out for me. Also I must add that I had been told that I would have an operation in six weeks time to fix my water works up, but that time as well elapsed. I mention this not so much as a complaint, but because I believe people should mean what they say. I rest my case there.


Well it’s really great to feel good again even though it will be only for a certain time. But to me that is nothing short of sheer luxury. It’s in certain moments such as these God gives you more grace to complete a more successful mission than the one you are already on. So Go Terry Go. 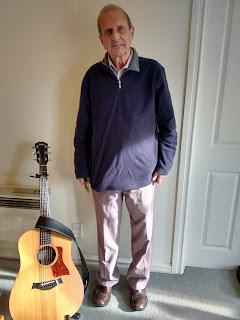